We hope this message finds you in good health during these challenging times. Our team is closely monitoring current events with our partners and customers and we wish to update you with some good news regarding the current status of our operations...

We are happy to advise that our manufacturing operations are currently continuing at full capacity. This includes normal lead times and supply of all LED Puck, aquaculture lighting and medical lighting products.

We will continue to update you should there be any foreseen changes to the status of our operations. In the meantime, we encourage all to take care and to support one another.

The Team at Planet Lighting

The SH36 Pedestrian Overbridge, known also as Matarawa Pa, opened to the public in May 2019 and connects The Lakes residential area and the Tauriko business estate. “It creates a safe connection for walkers and people on bikes between parts of the city that were previously disconnected.” says Martin Parkes, acting General Manager of Tauranga City Council.

The bridge features 248 Planet LED Pucks with Vertical Asymmetric optics in 4000K along its 188 metres of pedestrian ramps as well as custom blue LED lighting on the 34 metre footbridge itself.

Placing the bridge’s structure in place required closing a four-lane arterial highway. Impressively, traffic was halted for only an hour overnight, as 4 cranes hoisted 80 tonnes worth of materials, including the bridge and its prefabricated 72m long steel box truss, complete with concrete deck. The bridge was lifted in two parts and spliced together once in place. 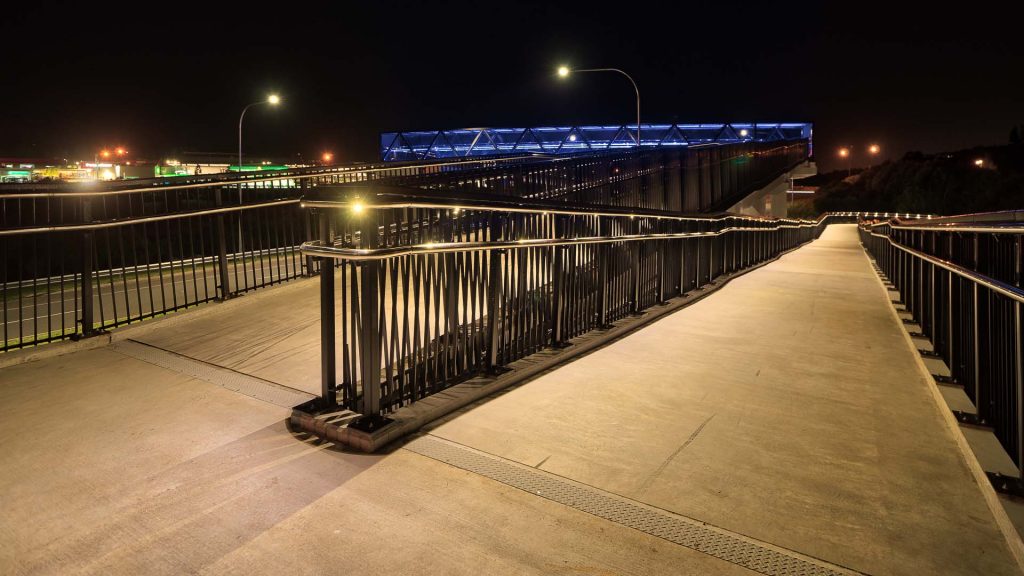 Planet LED Puck modules with a vertical asymmetric distribution at 4000K provide a comfortable, low glare lighting for the ramp and pathway sections.

Tauranga – A bridge of plenty

For Tauranga, the successful completion of the 4.6million dollar project is an important milestone for the burgeoning region with it’s significant cultural and economic identity. “[It’s] a stunning bridge in this fast-growing part of our city” says Parkes. Tauranga, with its estimated population of 145,000 people, is it the third fastest-growing region in the country, ideally positioned in the Bay of Plenty on New Zealand's northern Island. A coastal metropolis with the largest port in New Zealand – its international gateway for trade, fashion and the tourism industry as well as being an important historic centre, founded by Māori people in the 13th Century.

“A stunning bridge in this fast-growing part of our city. It creates a safe connection for walkers and people on bikes between parts of the city that were previously disconnected.” Martin Parkes, acting General Manager of Tauranga City Council.

The blue LED lighting of the bridge was chosen after Tauranga City Council consulted with mana whenua, Ngāi Tamarawaho – the blue representing safety and welcome to all travellers passing the bridge. The 67.5 meters of bridge lighting are on a daylight sensor, that automatically power on and off as needed. For the ramps, highly efficient miniaturised Planet LED Puck lights are discreetly installed inside the handrail tubing, minimising glare and providing smooth and uniform lighting over the pathway.

The impact of cost intensive pedestrian bridges and their design is considered increasingly important in infrastructure planning. Studies have shown that pedestrian bridge use and its effectiveness can be influenced by many factors. While pedestrian flow and density of traffic volume can have the most dominant effect, interestingly other influencing factors support pedestrian use of a bridge such as: fencing, signboards and how the bridge itself signals as “time saving and safe”. Human centric lighting design choices can both encourage and support this signal as well as the comfort of those crossing.

A harbourside city in Bay of Plenty, Tauranga is one of New Zealand's fastest growing cities.

And while Pedestrian bridges are largely about safety, they can also contribute an iconic image to the community identity – the lit structure becoming a symbol itself, which may have positive social and economic impacts.

Planet LED Puck has been featured in other local and international pedestrian bridge projects including:
The 760metre long Sölvesborg Bridge; the longest pedestrian and cycling bridge in Europe, the 220 metre long Jubilee Bridge in Singapore and the 130 metre long Chevron Island Bridge in Sunshine Coast Queensland Australia.

Special thanks to Michaela Chanmugam at  Creative Space Design Co. and Bailey Shelley at JSB Lighting.

The Team at Planet Lighting love creating the world’s most innovative lighting systems. Made in Australia. Exported to the world. Come see our award winning and class leading lighting solutions at www.planetlighting.com